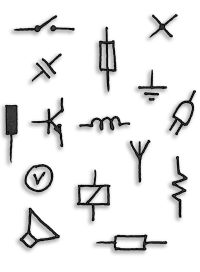 Nowadays the Global Electrical Standards are dictated by the International Electrotechnical Commission – IEC. In Europe, it is the European Committee for Electrotechnical Standardization – CENELEC that supports and cooperates with the IEC. More concretely, the graphs for Electrical and Electronic Symbology are governed by the European rule EN 60617 approved by the CENELEC under the international rule IEC 61082.
But… we are going to talk about history.

After the technical advances of the last years int the electric industry and the incoming industrialization of the production processes, the American Institute of Electrical Engineers – AIEE was born which started to develop regulations that pretended to establish order in the activities and electric specializations.

The AIEE create the first committee of normalization, the Committee on Electrical Units and Standards and other committees as the ones in charge of assigning the resistance of the cooper cable. This year the Henry was assigned as the autoinduction unit.

In Chicago another committee was created, with delegates from different countries, in charge of creating an international program in relation to the regulations, unit systems and electrical nomenclature.

This year, in the National Conference of Standardization of Electric Rules the rules that created the National Electric Code were enact. A year later the Committee on Electrical Units and Standards recommended to take the standard for the luminous intensity.

As a result of a discussion about Normalization of Generators, Motors and Transformers the first committee of the AIEE about product protocols was created, which was publicized in 1899 with the title of "Report of the Committee on Standardization".

In San Luis was hold an international congress that set the basics for following congresses about units and electrical standards. In said congress was recommended the creation of two new committees. One of them formed by American government representants being the ones in charge of the legal conversion of units and standards. The other one was responsible for the rules related to commercial products of electrical industries which originated the International Electrotechnical Commission – IEC in 1906.

During the World War some problems with the productive models in the industry were observed due to the lack of standardization, which encouraged the creation of working groups related to the “American war industries” to improve the normalization. This consequently derives in the creation of the War Industry Board.

In the post-war and with serious economic problems suffered in the industry, diverse building codes and activities in rules, units and standards were promulgated with the National Electric Code of the National Regulations Office.

The american military statements enter in the coordination of the rules creating the Federal Specification Board to unificate the specifications solicited by the different government departments.

This year was made a document of supplying to the militar industry with the name of JAN Specs.

After World War II the United Nations – UN coordinate the activities for the international normalization. This year was born the International Organization for Standardization – ISO to take care of the fields that the IEC didn’t. This two organizations work in Switzerland. Also, USA manage his rules and related organizations with the American National Standards Institute – ANSI.


More recently, more technical rules were made for the standardization of the construction of electrical and electronic devices in relation of their characteristics of operation, construction, dimensions, security, use… and to the symbology in the schematic representation of equipment and systems.

All of this rules, among other purposes, show the graphical way of representing with symbols the projects and electrical and electronic schemes. Despite the general wish to achieve international uniformity, nowadays still exist some private organizations and other regional, national and international organizations of standardization. That is, every country may have his own electric rules.